This is the first blog which will commemorate the 13 police officers from Stirlingshire Constabulary who were killed in World War One.  As well as commemorating the memory of these brave young men who left their duty as Constables in Stirlingshire to serve in the army, I hope the articles will also highlight the range of available resources that can be used to build up a story of a WW1 soldier. 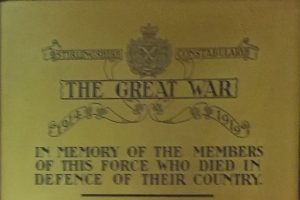 The town of Alyth lies in the fertile farmland just north of Dundee and Perth.  The area around the village has some of Scotland’s finest farmland and today is famous for the production of various soft fruits which are sold around the country and beyond.  Alyth was also home to Constable Alexander CRAIG, the first of the police officers of Stirlingshire Constabulary who I will be commemorating in the coming final year of World War One commemorations.

Alexander’s police record, held at Stirling Archive, states that he was born on the 21st September 1888 at Alyth and his parents John and Isabella are listed as being his next of kin.  He was the eldest of a family of at least six children.  His father John was initially employed as a roadman on the Bardmony estate south of Alyth but they later moved to nearby Blairgowrie, the largest town in the area with opportunities for employment in its textile mills.  In 1901 they are living in in William Street, Blairgowrie.  John is working as a carter for a general merchant.

Alexander’s Police Record tells us that he served for 6 years in the Royal Field Artillery before he joined Stirlingshire Constabulary in November 1912.  He was appointed as Constable 112 and his record describes him as being 5’10” tall, dark brown hair, grey eyes and a fresh complexion.  He served as a Constable in Falkirk where the Stirlingshire Constabulary Memorial was first unveiled in 1921.  It was not uncommon for police forces in the Central Belt to recruit outwith their own communities and there is a clear pattern in recruiting young, healthy men from farming backgrounds to Stirlingshire Constabulary.

As an Army Reservist Alexander was called up on the 4th August 1914 at the start of the war.  He was one of 6 Constables who were Army Reservists and who left the force in the first month of the war.  Chief Constable Middleton later reported this loss to the Police Committee and received permission to recruit replacement.  This may be an indication  that the war was expected to be over in a short period of time. 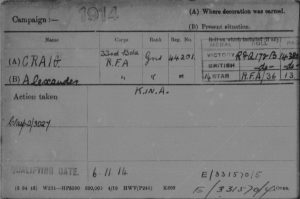 Alexander’s medal roll is found on The Genealogists.com.  It indicates that he first entered France on the 6 November 1914, qualifying him for the 1914 Star Medal.  He was a member of the 32nd Battery of the 33rd Brigade of the Royal Artillery which was part of the 8th Division.  In the following years he took part in many of the key battles of World War One including supporting the British Expeditionary Force in late 1914 and the Battle of Neuve Chapelle in 1915.  He also took part in the Battle of Loos in late 1915, a battle renowned for the number of Scottish Divisions that took part.

Alexander was a member of the Royal Field Artillery as opposed to the Royal Garrison Artillery which operated the large guns which were used for bombardments.  The Royal Field Artillery were lighter and more mobile supporting infantry and cavalry during attacks.   Alexander’s battery were involved in the Battle of Albert in July 1916.  In November 1916 the Battle of the Somme was nearing its completion.  Details of what actually happened to Alexander is not known but his unit was involved in the Battle of Ancre in the Somme area when he was killed in action. 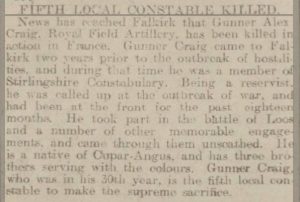 News of his death would have been passed to his family, now living in Coupar Angus.  An article later appeared in the Falkirk Herald on the 2nd December 1916 (above) which provides valuable information on his life and his army service. It states:-

News has reached Falkirk that Gunner Alex Criag, Royal Field Artillery, has been kiled in action in France. Gunner Craig came to Falkirk two years prior to the outbreak of hostilities, and during that time he was a member of Stirlingshire Constabulary.  Being a reservist, he was called up at the outbreak of war, and had been at the front for the past eighteen months.  He took part in the battle of Loos and a number of other memorable engagements, and came through them unscathed.  He is a native of Cupar-Angus, and has three brothers serving with the colours.  Gunner Craig, who was in his 30th year, is the fifth local constable to make the supreme sacrifice.

As stated in the article Constable Craig was the fifth local Constable by November 1916 to have lost his life in the Great War.

Amongst the saddest records to be found about those young men who died in the war is the Register of Effects held on Ancestry.  These record what valuables or effects were returned to the dead soldier’s next of kin.  It normally comprised of outstanding pay or pension payments.  Alexander Craig’s sum was £25 15d 9s and was distributed to his father John, who received over £23 and his sister Margaret who received the remainder.  It is worth searching on Ancestry’s will records as well as the Scotlandspeople Soldiers & Airmans Will collection.  In this instance there is no record on Scotlandspeople but Ancestry’s National Probate Index for Scotland records the confirmation of Alexander’s will at Perth on the 17 April 1917 to his father John Craig, listed as being a Water Inspector of Campbell Street, Coupar Angus.

Alexander CRAIG lies in the Guards Cemetery near Lesbeoufs in the Somme area of France.  The Commonwealth War Graves Commission website identifies that he is buried in grave IX.S.9.  However Alexander was probably initially buried alongside 15 fellow artillerymen at the smaller Ginchy RFA Cemetery located between Ginchy and Flers before his body was moved to the larger Guards Cemetery.

His name was later unveiled on the War Memorial at Stirlingshire Constabulary to commemorate him as one of the twelve police officers who has  been killed during the Great War.